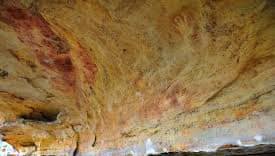 Mudgee is full of Aboriginal History, and was home to tribes from the Wiradjuri Nation, which extended from the Blue Mountain eastern ranges to the Lachlan and Murrumbidgee rivers in the west, with the Murray River forming the southern border and the Wellington plains and hills the northern border.   About 7,000 Wiradjuri people lived in the Bathurst region, when it became the European ruling area and the first town settled west of the Blue Mountains.

If you walk West along the property, up and over the first Ridge, you’ll eventually come to the Reyners creek – which traditionally was a sheltered resting place for the women and children whilst the males were out hunting for the day.  Lower Piambong Road is known to have a lot of culturally significant activity and many relics have been found here over the years.

The Wiradjuri nation was split and sub-split into many tribes. In Mudgee, the Mowgee clan extended over a 50km radius. The Mowgee women’s totem was the wedge tail eagle (Mullian) and the men’s totem the crow (Waggan). They settled around the Cudgegong River, using its resources for food, and water.

The Mudgee district holds many sacred Aboriginal sites and cave painting, some sites with evidence of tool making. Some of the better known and accessible sites include Hands on the Rocks; The Drip; Babyfoot Cave (more information following).

Aboriginal people known to the explorer William Lawson, based in the Bathurst settlement, told him there was a fine country towards the north-west of Bathurst, which later became described as the ‘land of milk and honey’.

Prev post
We use cookies to ensure that we give you the best experience on our website. If you continue to use this site we will assume that you are happy with it.Ok